How Fatigue Testing of Square Windows Changed the Aerospace Industry

These material curves, which relate stress levels to a failure number of cycles for a particular material, grant engineers the ability to make design-based and probabilistic predictions of component lifetimes. Even when components are subjected to numerous and various cyclic loading regimes.

The De Havilland Comet was used as an example of the potential consequences of lacking design understanding in fatigue induced failure mechanisms. The Comet 1 was the worlds first commercial jetliner and experienced a number of significant incidents during its early life. Major incidents occurred in 1953 and 1954 that led to the eventual grounding of the aircraft and the revocation of its airworthiness certificate. Subsequent investigations discovered a number of issues, and extensive fatigue testing discovered stress concentrations occurring at the corners of the square windows which accelerated the catastrophic failure mechanisms. This fact is now widely documented and at the time these investigations enabled the aerospace industry as a whole to modify and improve their aircraft designs. 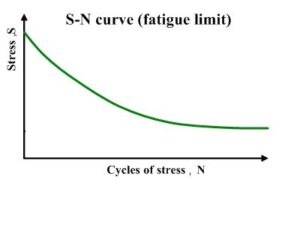 Another particularly important point was raised in the Q&A session that due to the log-log nature of the material s-N fatigue curves, an error of 10% in the stress range prediction from theoretical calculation can lead to a 100% error in the predicted number of load cycles to failure! This means structural simulations need to be highly detailed, and physical tests need to be tightly controlled, in order to make confident predictions of in-service design fatigue life.

If you are a NAFEMS member, you can view the slides and recorded webinar here.