The world is full of particle-fluid interactions and flows. From tablet coatings, vacuum cleaners and pipe erosions, engineers need to study these applications to ensure their products are optimised.

The challenge is that traditional computational fluid dynamics (CFD) and discrete element method (DEM) software assume that particles are spherical. The world is rarely this perfect.

When engineers need to assess non-spherical particle-fluid interactions, they can create a multiphysics simulation by coupling CFD and DEM using ANSYS Fluent and Rocky DEM, from ANSYS Channel Partner ESSS.

There are two ways to couple CFD-DEM models: using one-way or two-way communication.

One-way CFD-DEM coupling is typically used when simulating dilute flows. In this approach, the fluid field affects the particle flow, but the particles don’t affect the fluid flow.

In both approaches, all of the particles are tracked by a DEM solver using Lagrange methods. The DEM solver explicitly solves the equations that govern the particles’ motion (both translational and rotational) and energy balance. As part of the CFD-DEM coupling, these equations consider the net force and torque placed on each particle by the fluid.

In two-way coupling, the information exchange between CFD and DEM works both ways. The pressure and fluid velocities computed by ANSYS Fluent are used by Rocky DEM to compute the particle phase volume fraction along with the momentum and energy exchanged between the particles and fluid phases. These values are then transferred to the CFD solver so it can update the pressure and fluid velocities. This two-way exchange of information continues, for each time step, until convergence.

The Benefits to Coupling Fluent and Rocky DEM

The main advantage to coupling Fluent and Rocky DEM is that engineers can accurately perform simulations in which particles have unique, non-spherical shapes. These simulations are better able to predict real-world behaviour, because of Rocky DEM’s precise shape representations, in combination with its laws to compute fluid forces on particles.

Engineers can model various shapes, including:

In addition, since the DEM solver tracks each individual particle, there is a complete history of particle movement inside the domain. For instance, Rocky DEM can track particle:

When this particle history is processed by Rocky DEM’s post-processing toolset, engineers can extract a high level of information from the coupled CFD-DEM simulation. This information provides insight into your application problem and ultimately reduces development costs and time to market.

Engineers who are conducting CFD-DEM simulations will have access to all of Rocky DEM’s features when coupling it with Fluent.

CFD-DEM simulations can be used to study various industrial and commercial applications.

For instance, CFD-DEM can simulate coating equipment. In this application, spherical particles are fluidised in air that is flowing from the bottom. These spherical particles then collide and suspend ring-shaped particles. This simulation helps engineers to predict scenarios in which the rings will not be suspended and will fall near the gas inlet. When this happens, the rings block the gas flow and collapse the bed.

CFD-DEM coupled simulations can also model cyclonic vacuum cleaners that are designed to clean up pet hair. The movement of the hair strands in the cyclone can be simulated using a one-way coupling between Fluent and Rocky DEM’s flexible fibre particle model. This simulation can be used for conceptual device testing, which reduces the number of physical lab-tests — minimising development time and cost.

Pharmaceutical tablet-coating devices can be modelled using two-way CFD-DEM coupling, multiple domains and non-conformal, moving meshes. Custom particle shapes can be used to accurately predict the tablet temperature as hot air flows within the equipment. The simulation enables engineers to predict the residence time and temperature distribution of particles for different operating conditions. 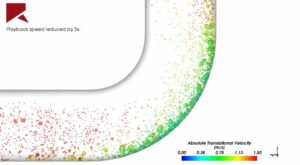 Pipe erosion can also be modelled using CFD-DEM coupling. In this oil and gas application sediments in the flow impinge on a pipe as it bends. The drag force is computed for each particle based on its shape, alignment with the flow and interactions with the pipe’s surface. This simulation can be used to determine areas in the pipe that are prone to wear.

These coupled CFD-DEM simulations provide engineers with the understanding they need to optimise, predict and design-related equipment and processes.

This blog was originally posted on ANSYS’ website here.